Top 10 Wind Farm Myths – Sorting the Fact from the Fiction

If we want to help reduce the impact of global warming, it’s clear we’re going to have to reduce our reliance on polluting energy sources.

As the UK is one of Europe’s windiest nations, and with rapid advances in turbine technology, harnessing wind power is an increasingly efficient way of contributing to our carbon-reducing targets.

You can get your domestic electricity from a UK energy supplier which uses wind, and produces 100% renewable electricity.

There’s a lot of misinformation around about wind power, however, so here’s a rundown of some of the most common wind power myths to help you sort the fact from the fiction.

Myth: You’d have to fill the countryside with tens of thousands of wind farms to produce enough energy to make a difference.
Fact: Improved technology means that a single modern wind turbine produces far more energy than before – enough to power around 1,000 homes. As fewer turbines produce more electricity renewable energy targets can be met without a wind farm on every corner.

Myth: Wind farms won’t make a difference to climate change anyway.
Fact: To reduce the impact of climate change, we need to switch to clean, renewable sources of energy like wind power, which produces no greenhouse gases. One modern wind turbine saves more than 2,000 tonnes of CO2 emissions every year.

Myth: The lights will go out when it’s not windy.
Fact: While the amount of energy a wind turbine produces depends on the wind strength, modern turbines actually produce energy around 70-85 per cent of the time. And if it’s not windy in one part of the country, it’s almost guaranteed to be windy enough elsewhere in the UK. After all, the UK is one of Europe’s windiest nations. On top of this, wind power should be part of a renewable energy mix – it will never be relied upon entirely.

Myth: Wind power is more expensive than other forms of power.
Fact: Wind energy has steadily become cheaper over the years and is now competitive with coal and even nuclear power – that’s before you add in the negative environmental costs of other power sources. As wind power costs keep falling, it is set to become one of the cheapest forms of power available, eventually even cheaper than gas.

Myth: Wind power needs back up in case the wind doesn’t blow.
Fact: All forms of power need back up. No energy source can be relied on entirely. Current energy grid back up can more than handle fluctuations in wind farm power and as renewable power is developed wind power will never be relied upon on its own. 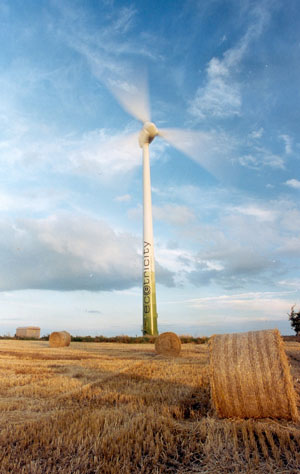 Myth: Wind farms harm humans.
Fact: There have been no recorded cases of humans being harmed by wind farms and the accusation that wind turbines emit harmful infrasound has been dispelled by top scientists.

Myth: Wind farms are noisy.
Fact: Stringent guidelines mean turbines must be placed far away enough from homes to minimise any noise pollution. Mechanical noise from modern turbines is virtually nil – the main sound they make is that of the arms passing through the air.

Myth: Wind farms reduce property prices.
Fact: In Scotland, a study found that the strongest advocates are those living within 20 kms. of a wind farm. Thinking about future generations, they also support an increase in the proportion of electricity generated from wind farms. Furthermore, the Royal Institute of Chartered Surveyors said that “proximity to a wind farm was not an issue” on house prices.