Whether you’re looking to turn over a new leaf with a weekend of serious detox or simply fancy a weekend of relaxation and pampering, Europe’s spa towns are within easy reach by high speed rail.

Since way back in Roman times the weary have been sampling the healing powers of mineral waters and hot springs. In the 19th century Europe’s spa towns became the resorts of choice for the Continent’s royalty and glitterati, who couldn’t wait to spend every summer taking to the waters.

Fancy pampering yourself and exploring some of Europe’s most beautiful towns and cities in the process? Here’s our guide to some of the best. 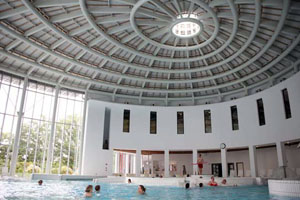 Where better to take to the waters than the historic Belgian town that gave all other spas their name?

This is where Europe’s high-fliers and aristocracy took to the waters in 18th century in the name of relaxation and good health, and the resort has been brought bang up to date with the stunning new Thermes de Spa resort, a state of the art pampering centre overlooking the beautiful architecture of the old town.

Spa is a two-hour journey from Brussels via Verviers. Return tickets to Spa start at £80 with Rail Europe.

2. So good they named it twice – Baden Baden, Germany

This wonderful spa town on the fringes of the Black Forest has been attracting the great and the good to its rejuvenating waters since the likes of Queen Victoria dropped by in the 18th century.

Head to the Caracalla, an outdoor thermal spa which makes a wonderful experience during the chilly winter months, then if all that good behaviour gets too much, head to the famous casino, once described by Marlene Dietrich as “the most beautiful in the world”.

3. Luxury on the edge of Lake Bourget – Aix les Bains

The ruins of the original Roman baths are located underneath the Thermes Nationaux, and the town’s hot springs are renowned across France for their positive effects in the treatment of rheumatism.

As the name suggests, this charming valley town has long been revered for its salt water, said to be full of life-affirming qualities whether you choose to bathe in it or tip it down your throat. In fact, French doctors are so fond of it, it can even be offered on prescription. It’s situated in the heart of the Jura Mountains – one of France’s most beautiful regions, and something of a hidden gem.

After you’ve pampered yourself at one of the town’s spas, take a look at the UNESCO-listed salt mines and take in the history of a town built on “white gold”.

Salins les Bains is a short bus trip from Mouchard.

Well known to us Brits for its mineral water, Vittel’s a charming spa town set amid the lush, green landscapes of Lorraine in North eastern France.

Nearby Contrexéville’s water is perhaps less well known, but its qualities have been revered since the Romans were in town, with some 24 marble fountains on its main square. As with most French spa towns, there’s a wonderfully ornate casino, complete with high ceilings with lashings of gold leaf.

Vittel is easily reached by taking a TGV service from Paris via Nancy. Contrexéville is just a short trip from Vittel.