International trains on the high-speed route between Paris and Amsterdam are the first in Europe to use solar power to help run them after a huge array of photovoltaic solar panels was installed on top of a 2-mile-long tunnel on the line. 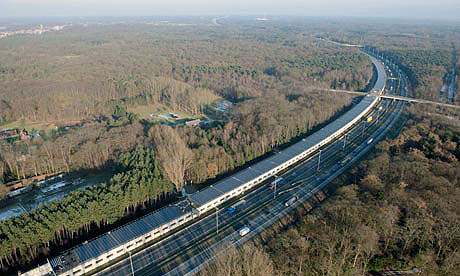 16,000 Solar Photovoltaic panels power the train for 8 miles near Antwerp

The energy generated feed into the line’s infrastructure, powering signals, lighting and in-train power points, and will even help power Antwerp station. So if you’re travelling to Amsterdam on a train to Europe from London or on the first stage of your InterRail trip you could be powered by the sun.

The tunnel crosses Antwerp, in northern Belgium, and features 16,000 solar photovoltaic panels producing 3,300 megawatts per hour of electricity. That’s enough to power some 1,000 families. The panels, which cost €15.6 million to install, are enough to cover eight football pitches and as well as being a green, clean source of energy, will also keep down costs on the railway.

The first ‘solar train’ left Antwerp headed for the Netherlands on Monday 6 June, and connected with the solar power feed for a stretch of around 8 miles. Solar energy company Enfinity, which developed the project, now wants to install more solar train power in Europe and across America.

Solar power has long been used for smaller transport applications, with marine solar panels, and solar power for motorhomes and caravans already a popular and effective renewable energy solution.

It’s clear that with big engineering projects and transport infrastructure now joining the solar revolution, this green, free power source will go from strength to strength. Indeed, in the UK, London’s new Blackfriars Station, opening in 2012, will be home to the country’s biggest solar panel array, enough to provide half of the station’s energy.