InterRailing in Eastern Europe is an adventurous, culture-packed and low-budget way of seeing some of the continent’s most interesting spots. And now that the age restriction has been lifted, anyone can buy InterRail tickets – it’s the eco friendly, cost-effective way of seeing the region with the hassle of a car.

So for a trip with a difference, leave the obvious behind and InterRail Eastern Europe.

If you’re new to Eastern Europe and don’t have the luxury of a month to spend on holiday, then we suggest a two-week InterRail tour to some of the region’s more accessible cities.

Our suggested Eastern European itinerary takes you from the reborn German capital Berlin to the delights of Prague and Krakow before heading down to the banks of the Danube and Hungary’s capital Budapest. Then it’s across country to Ljubljana, Slovenia’s compact and incredibly beautiful first city.

Our journey covers a lot of miles, with a few long and overnight journeys. These days Eastern European trains are much more comfortable than before, however, and in our opinion the rewards of visiting some of Europe’s most interesting, and best-value, destinations, will be well worth it. Of course part of the fun of InterRailing is planning your own trip, so for some help check out our InterRail Advice guide.

To kick off your InterRail Eastern Europe adventure, catch the Eurostar to Paris, then walk across from Gare du Nord to connect with the overnight train east from Gare de l’Est to Berlin. The ‘Perseus’ sleeper train leaves Paris at 8.20pm and gets into Berlin at just after 9am.

The Reichstag Building, Berlin. Berlin is a great place to start an Eastern European InterRail journey

Your first taste of Eastern Europe will be three nights in the incomparable German capital. Since the fall of the Berlin Wall and reunification in 1990 Berlin has re-emerged as on of Europe’s most vibrant, exciting cities and the perfect introduction to Eastern Europe. It’s also great value compared to many other major European cities.

Learn about the city’s divided past at Checkpoint Charlie, visit the moving Holocaust Memorial, take in world class museums and culture, marvel at the astounding modern architecture and dive into the buzzing bar and café scene.

You might not want to leave, but there’s plenty more in store as you take the train onwards to Poland.

Make the six-hour journey to Krakow, for a two-night stay in Poland’s most beautiful city.

Krakow’s Old Town is a masterpiece, centred round Europe’s largest town square, where cobbled streets fan out, lined with baroque churches and elegant mansions and the former home of Pope John Paul II. The wonderful Wawel Castle and Palace overlooks the Old Town, and beyond lies the fascinating old Jewish Kazimierz quarter. 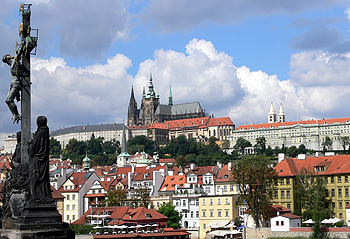 Prague is a must see on an Eastern Europe InterRail trip

Krakow’s quite compact, so a couple of nights will serve you well, before making the 5-hour train journey south to Prague for a three-night stop.

Prague’s a town of many faces. There’s the medieval Stare Mesto, or Old Town, the Renaissance-era Mala Strana, or ‘Lesser Quarter’, and the museums and monuments around Wenceslas Square in the Nove Mesto (New Town).

You’ll be able to cover a lot of ground with a three-night stay, and top of your list should be the Old Town itself, Charles Bridge, which straddles the Vlatava, and the historic castle district. Evenings are as enjoyable as the days in Prague, too, and its not hard to avoid the stag parties by heading to one of the city’s excellent jazz clubs for live music and superlative (and extremely cheap) Czech pilsner.

You’ll have to drag yourself away from Prague, but great things are in store as you make the trip to Budapest, a journey of around 7-8 hours, for a two-night stop in the incomparable ‘Pearl of the Danube’.

Budapest is a magnificent city, or should we say cities. Buda, its older half, with its looming castle and medieval streets, is on the west banks of the Danube. Pest, meanwhile, graced by the unmistakable Parliament Building and elegant wide boulevards, is on the east. The city combines the café culture of Vienna with the eastern European charm of Prague, and is also famous for its clutch of hot thermal baths – a visit to one is not to be missed.

Next up, there’s the nine-hour journey down to Slovenia.

Arriving in Slovenia’s pint-sized capital Ljubljana, you’ll find one of Europe’s friendliest, prettiest and most enjoyable cities. Simply watch the daily promenade from an open-air riverside café or exploring the city’s compact historic heart, Ljubljana is a real treat, and a relaxing final Eastern European destination.

Spend a couple of nights in the city before ending the trip by either flying back to the UK from Ljubljana, or taking the eco option and extending the tour slightly by returning to London by rail via Geneva and Paris.

What InterRail pass do I need?

In the old days, there was just one InterRail pass covering the whole of Europe for a whole month. These days, there’s much more flexibility.

For a two-week InterRail tour of Eastern Europe like the one we’ve suggested, your best bet is to get your hands on a 15-day InterRail Global continuous pass. This will give you unlimited travel to all InterRail countries for 15 days in a row. It’s also means you’ve got the flexibility to change your plans as you go along.

If you can’t take the full two weeks off then the InterRail Global Flexi pass is the ideal choice. Choose the 5 days in 10 option and you can enjoy unlimited rail travel throughout the InterRail countries for 5 chosen days within a 10-day period.

Sleeper trains are excellent ways of putting the miles under you without wasting valuable sightseeing time. As well as the sleeper from Paris to Berlin, several of the journeys in this itinerary could also be made overnight.

You’ll generally have the choice of standard seat, fold-down seat of a proper cabin. While the standard seats are included in the InterRail price, you’ll need to pay supplements for cabins and fold-down seats, although they’re well worth it.

You might decide that our itinerary is all well and good, but you’d rather spend your time exploring one Eastern European country in depth. If that’s the case, then you need an InterRail One Country Pass. You can choose from either 3, 4, 6 or 8 days’ unlimited rail travel within that country within a month. The price depends on which country you’re visiting.

O2 has revealed its new Eco rating scores, showing which mobile phones are the most environmentally friendly. Nokia comes...