Could super-efficient solar ‘Nantennas’ be the Green Power of the future?

Solar power is already an excellent source of clean, renewable energy, and photovoltaic (PV) solar panels are springing up all over the place – on boats, caravans and on roofs across the UK.

PV technology has become more and more efficient in recent years – solar panels can even produce electricity on cloudy days – but current technology restricts them to capturing only about 20% of available light.

But all this is set to change thanks to cutting edge technological research in the States, with American scientists currently working on a flexible solar film that could amazingly capture more than 90% of available light.

A revolution in energy provision?

It could herald a major breakthrough in green energy, and the team developing the technology reckons prototypes should be ready in the next five years. If successful, it could revolutionise home energy provision and be a massive help in breaking our reliance on polluting, finite fossil fuels.

“Our overall goal is to collect and utilize as much solar energy as is theoretically possible and bring it to the commercial market in an inexpensive package that is accessible to everyone,” said University of Missouri engineering professor Patrick Pinhero.

“If successful, this product will put us orders of magnitudes ahead of the current solar energy technologies we have available to us today.”

The team is developing a thin, mouldable sheet of small antennas called ‘nantenna’ that are designed to harvest waste heat and convert it into useable electricity.

It’ll be a huge improvement on existing technology, as electricity generated using standard PV panels doesn’t capture much of the available solar electromagnetic spectrum from sunlight. 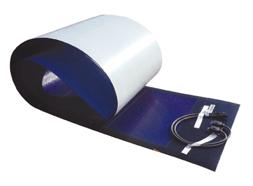 It’s thought that in five years they will have prototypes of the flexible film that could be incorporated into building materials and infrastructure. Flexible solar panels already exist, and are a popular way of producing cheap, green electricity on boats and caravans, but the new technology would make solar power much, much more efficient.

American firm MicroContinuum is developing the manufacturing process to produce the energy-harvesting film cheaply and in large volumes, and the team is currently looking for investors and funding from the US government.

Technology could be used for diverse applications

As well as paving the way for ultra-efficient solar power, the scientists think the technology could be useful for many other applications too. It wants to develop an energy-harvesting device for industrial infrastructure like solar farms and factories that generate waste heat. The technology could also be used for optical computing, infrared communications and even in devices for spotting illegally imported goods at airports.