Springwatch Back On BBC For Another Nature-Packed Season 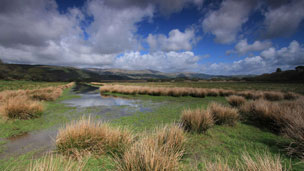 Nature lovers are in for their annual treat as the new BBC2 Springwatch season gets set to kick off from 30 May 2011, again featuring presenters Kate Humble and Chris Packham and the expert Springwatch technical team.

Since its launch in 2005 years Springwatch has become something of a British institution, and for the new season will see the programme move from its base at Pensthorpe in Norfolk to the remote, biologically diverse RSPB Ynys-hir Nature Reserve in Powys, Mid Wales.

This 700-hectare reserve is at the top of the Dyfi Estuary by the Cambrian Mountain and is home to a variety of habitats, from Welsh oak woodland to saltmarsh, heath and wet grassland.

This year the team plans to broadcast live pictures of nesting grey herons, egrets and, hopefully, also the rare red kite. The Welsh RSPB reserve is also home to rare birds of prey like hen harriers, goshawks and ospreys, plus dozens of other bird species. River and pond side cameras will be on the lookout for otters, grebes, kingfishers and more.

Other wildlife includes reptiles like grass snakes, many species of uncommon butterfly and hundreds of types of moth. Springwatch will ensure viewers get to see the best of the area’s natural wonders thanks to a network of fibre optic cables stretching for dozens of miles and linking the mini cameras that catch all the nature action.

Springwatch has just been honoured with a Bafta Special Award in recognition of its creative and technical teamwork and the raising of technical broadcasting standards.

“Winning the Special Award at the television craft Baftas is a real honour. Over the last seven years, the whole Springwatch team has strived to embrace new technology, to deliver natural history to our audience in a thoroughly modern way,” said Tim Scoones, Springwatch’s executive producer.

“The digital revolution has allowed us to involve our viewers in the real and intimate stories of our animal characters in ever deeper and more engaging ways; from HD mini cameras to the latest in webcam streaming and live broadcast technology.”

As well as watching everything on TV and the internet there are plenty of other ways to get involved with Springwatch, including taking part in the Springwatch Survey, recording when and where the signs of spring are appearing in your local area. As the effects of climate change start to show it’s important for scientists to get a clear understanding of what’s impact global warming is having on our environment, and the survey will form an important part of on-the-ground research.

This nationwide survey is being organised for Springwatch by the Woodland Trust. But it’s not the only way you can get involved in nature events this spring.

Could super-efficient solar ‘Nantennas’ be the Green Power of the future?

Solar power is already an excellent source of clean, renewable energy, and photovoltaic (PV) solar panels are springing up all...