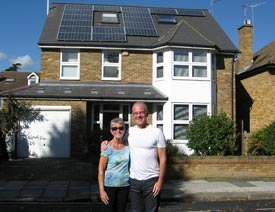 The government has announced its new plans to promote ‘microgeneration’ and decentralised energy production. It’s aiming to cut red tape and make localised energy provision a reality across England.

“I want to see a revolution in energy generation at a local level, giving genuine power to the people,” said Greg Barker, Energy and Climate Change Minister. “We want to help people who are enthusiastic to generate their own energy matched by an industry with the desire, creativity and tenacity to grow in a sustainable and responsible way.”

“That’s why we have worked with industry to develop a clear way forward which includes cutting red tape for micro hydro projects helping this industry to prosper.”

The strategy comes after a public consultation and collaboration with industry experts. It will help bring small-scale renewable technology into homes, businesses and communities across England, making microgeneration a mainstream energy production method and helping reduce the country’s carbon emissions.

The strategy includes actions to improve the Microgeneration Certification Scheme (MCS) process, making it work more effectively for small and medium sized businesses while protecting consumers at the same time.

Other actions include making sure consumers are protected across the microgeneration sector, and developing the skills and knowledge needed that are needed as it expands. The strategy will also make sure householders are made more aware of the benefits of microgeneration and the options available.

Microgeneration is the production of power or heat on a very small scale, produced near to where the power or heat is needed. It’s defined as installations generating less than 50kW for electricity and less than 300kW for heat.

Because microgeneration occurs near to where the heat of power is used, distribution losses are almost completely eliminated, making it a much more efficient system than traditional large-scale operations. As well as being green and efficient, microgeneration makes sense because it reduces the risk of power cuts from large centralised generation plants affecting large areas of the country.

Other existing government microgeneration initiatives include the Renewable Heat Incentive and the Feed in Tariff scheme, where householders generating excess energy can sell it back to the National Grid.

Check out our microgeneration guide to find out more about renewable energy.

And it’s not just the government that’s getting behind small-scale green energy, British Gas and River Cottage have also teamed up to create the Energyshare initiative, focusing on microgeneration in communities across the UK.