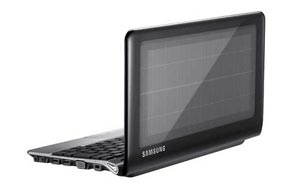 We’ve had solar panels on backpacks and a whole host of other solar powered gadgets, and now a new solar powered laptop has been launched.

The Samsung NC215S has efficient photovoltaic solar panels integrated into its lid, and boasts a potential battery life of up to 14.5 hours – it’s estimated that 2 hours of direct sunlight will provide around an hour of charge. The new laptop will initially be available only in Russia and the US from summer 2011, and the US release will be priced at around $399.

The compact netbook-style PC will run Windows 7 and is comparable in power and features to most comparable machines, with a 1.66 GHz dual-core processor, a 250 or 320 GB hard drive and 1 GB of RAM. Screen size is 10.1 inches.

After its launch in Russia and the US it’s expected that Samsung will release the solar laptop to the African market, where it could prove a real hit, as reliable sources of power are not always available in many areas. There are no plans to market the laptop in the UK at the moment, but the device could pave the way for more solar powered computers in the future, with Samsung’s competitors bound to follow suit.

Samsung has been involved in solar technology for a couple of years now, previously launching a solar powered mobile phone in 2009. Solar powered chargers are already a tried and tested way of topping up mobiles and other electronic gadgets, and the introduction of solar computing is the logical next step.

Solar panels will be becoming more and more common in the future, and already cheap and efficient home energy solar panel kits, marine solar panels and even camping solar panels are available. Prices for solar panels are also sharply falling, and with government incentives like the Feed in Tariff scheme, where any excess solar power generated at home can be sold back to the National Grid, solar is already a renewable energy source that is practical and financially credible.We’ve had solar panels on backpacks and a whole host of other solar powered gadgets, and now a new solar powered laptop has been launched.