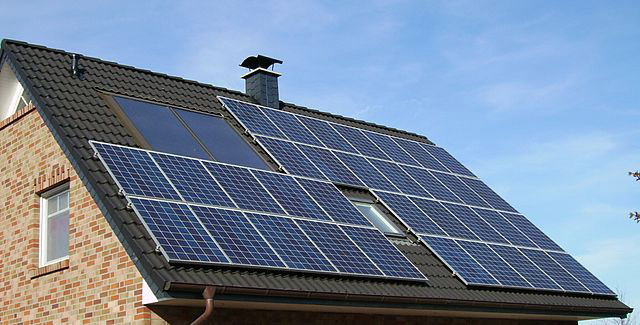 Installing renewable solar PV panels in your home not only provides cheap, green electricity, it can make a real different to property prices. There’s a growing body of evidence to back this up.

A major study by Lawrence Berkeley National Laboratory in America provides clear proof of the link between solar power and house prices. Some 72,000 homes were surveyed, with results showing that those with solar power sold for on average $17,000 more than those without.

Existing houses that were then fitted with solar panels increased in value the most.

The US Department of Energy’s Office of Energy Efficiency & Renewable Energy backs up these findings, saying that solar powered houses sell twice as fast as non-solar homes.

Other US figures suggest that decreasing electricity bills can have a 20x effect on house prices – a $1,000 cut in yearly electricity costs putting some $20,000 on the price of a home.

At home in the UK, a recent study of prospective home buyers in Oxford also showed that solar power would increase house prices – 33% of those surveyed said that they would pay more for a home with solar PV installed.

And a major survey from the Energy Saving Trust concurs. More than a third of respondents said they’d pay more for a house with renewable energy.

Philip Sellwood, chief executive of the Energy Saving Trust, said: “It seems Britons are willing to pay more for a home with a renewable energy source so investing in a solar panel or a wind turbine could add to the resale value of a property and be as attractive to house hunters as a new kitchen or solid wood floors.”

It all points to the fact that installation costs – once a barrier to uptake of solar power – can be recovered not only through cheaper energy, but through increased house prices as well.

The benefits of home solar panels are only going to increase in the future. Fuel prices will continue to rise as reserves run out, and environmental awareness is increasing as climate change takes hold. Energy efficient homes producing cheap green energy are only going to increase in value as they’ll be a sure fire way of safeguarding against fuel price rises and instability.

In fact, forecasts from Deutsche Bank show that fuel prices could rise by up to 50% in the next four years, putting hundreds of pounds on yearly household energy bills. It’s clear that solar-powered homes will become more and more attractive in the future.

In addition, there is talk of council tax being graded according to a home’s carbon footprint, which will further up the attractiveness of a house fitted with renewable energy generation.

All these factors are given an important extra boost when you consider the UK government’s feed-in tariff scheme. Under the scheme, householders with solar PV earn money on all renewable energy produced, plus extra bonus payments for any excess energy that goes back to the National Grid.

It means that an average-sized home with solar PV can earn more than £1,000 a year. As a typical home solar installation costs around £10-12,000, you’ll have recouped your initial investment in about 10 years.

As solar feed-in tariff payments are guaranteed for 25 years, it means the home would than have another 15 years of feed-in tariff earnings to come. This £15,000 bonus can be transferred to new owners of your home – a major draw for buyers.

It’s a winning situation for both house seller and buyer. But don’t beat around the bush. Now’s the time to get your home fitted with solar PV technology, as feed-in tariff rates are likely to be downgraded for installations fitted after April 2013.

It means you’ll reap the most benefits by getting clever and investing in solar power now. You’ll start saving money on your energy bills, start earning from the feed-in tariff and maximise potential house price benefits. A compelling case for getting solar PV panels installed now.