New cheap and super-efficient solar power innovation from the US 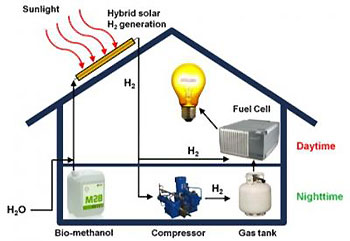 Solar power innovation continues apace, with scientists across the world competing to find new and innovative ways of converting the sun’s rays into clean energy.

We’ve had Apple and Samsung looking into micro solar power for their gadgets, solar cling film and even solar panels printed by inkjet printers, and now an engineer at Duke University, North Carolina, USA, has designed a hybrid solar power system that could prove more efficient and cheaper than standard photovoltaic solar panels.

Engineer Nico Holtz has been testing a system where sunlight heats a combination of water and methanol in glass tubes on a rooftop. The heated chemicals then mix with a catalyst to create hydrogen, which can then be stored and used as fuel. It lets up to 95% of available sunlight to be used to create energy.

Hotz has already done experiments in the months of July and February to compare the system’s performance during the summer and winter and is now testing the technology further.

A new twist on solar panels

The hybrid system looks like standard solar panels but is actually very different, containing copper tubes coated with a layer of aluminum and aluminum oxide and partly filled with catalytic ‘nanoparticles’. A mix of water and methanol flows through the vacuum-sealed tubes.

“This set-up allows up to 95% of the sunlight to be absorbed with very little being lost as heat to the surroundings,” said Hotz. “This is crucial because it permits us to achieve temperatures of well over 200 degrees Celsius within the tubes. By comparison, a standard solar collector can only heat water between 60 and 70 degrees Celsius.”

Power can be used immediately or stored for later

Once the evaporated liquid reaches these temperatures, small amounts of a catalyst are added to produce the hydrogen in a very efficient way. The hydrogen can then be stored in a fuel cell and used straight away or stored to provide power later.

“We performed a cost analysis and found that the hybrid solar-methanol is the least expensive solution, considering the total installation costs of $7,900 if designed to fulfill the requirements in summer, although this is still much more expensive than a conventional fossil fuel-fed generator,” Hotz said.

It’s more evidence that solar power is one of the most promising renewable energy sources for the future, and in fact, conventional solar panels and solar panel kits are already a practical and cost-saving home option.