Could solar panels be produced by injket printers? 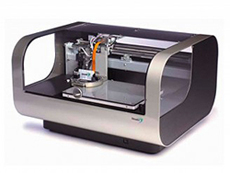 It’s clear that with the growing cost and reducing supplies of fossil fuels we’ll have to use more and more renewable energy sources in the future. And there is certainly loads of research and work going on around solar power these days.

While solar power is already a viable source of clean eco-friendly power for homes, boats and even camping, new developments are set to make it even more efficient and low cost.

Scientists at Oregon University in the States are currently working on an innovative new method that will produce solar power generation cells using inkjet printing technology. This new technique will be cheaper and quicker than existing solar cell production methods, and will reduce waste generated in the production cycle by 90% as well.

Inkjet technology will be familiar to most people through its use in printing photos and documents. The scientists say that the reduced cost and waste of using injet tech will outweigh the fact that the solar cells it can produce will be of lower power than conventional solar cells.

A material called chalcopyrite is printed onto the cell using the same kind of method used in inkjet printers but using special ink. The scientists are currently able to make solar cells this way with 5% efficiency. And in future, developers reckon they can refine the process to make the cells 12% efficient.

Currently, solar panels are relatively efficient, converting around 20% of available sunlight into electricity, but making materials used in their construction is costly and energy consuming. It’s still more efficient than fossil fuels, however. And while the inkjet approach won’t be as efficient as conventional solar panels, the cost and waste benefits could well outweigh this and help make solar power mainstream.

It’s an interesting development, and should be contrasted by the approach from scientist at the universities of Missouri and Colorado, as previously reported on Green Abode, who are looking for a way to make solar panels capture more of the sun’s rays. Whatever the result, with incentives like the government’s Feed in Tariff scheme, where you can sell any excess home energy generated back into the National Grid, solar panel is here, and here to stay.