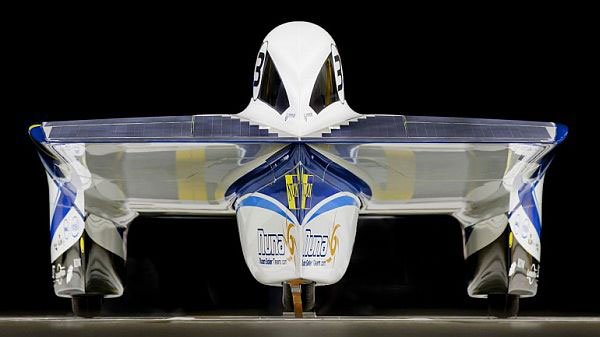 Nuna6 is the entrant from the Nuno Solar Team from Delft University, the Netherlands

Here at Green Abode, we’re always on the look out for new solar power developments. It’s already a viable renewable home energy alternative and with exciting technological advances happening all the time, it’s clear it’s going to become a key part of a sustainable future.

And events like the 2011 World Solar Challenge are helping raise the bar in solar energy. The challenge is to built a solar powered car and drive it across Australia, and many of the world’s top universities are entering. The lessons learned from producing these prototype cars should help inform ecological cars of the future.

The 2011 event is the 11th bi-annual World Solar Challenge, and starts on 16 October. Thirty teams of solar vehicles will race for 10 days on a 3,000-kilometre route from Darwin to Adelaide along Australia’s Stuart Highway.

It’s a very competitive field this year, and two of the entrants are already claiming they’ve got the best design to win the challenge outright.

The hot European contender, the Nuon Solar Team, is from the Netherlands and has taken part in every race since the World Solar Challenge started in 2001. Nuon has won four times and are keen to regain the trophy after a major crash and second placing during the last World Solar Challenge in 2009.

The team is composed every two years of students from Delft University of Technology, who take 18 months off from their studies in order to design and build a new solar car.

The 2011 entrant Nuna6 is claimed to be a big improvement over its predecessor. Nuna6 needs less solar energy to drive at the same speed as it is lighter and produces less drag. After tests in wind tunnels and on airfield runways, it’s reckoned the vehicles has a maximum speed of 145kmh, and will be able to average 95kmh during the 3,000 kilometre journey across Australia.

“For me, each car is the best ever,” he added. “That’s what we thought in 2009 too with Nuna5. But each time they seem to be able to get better. This team is also building on the knowledge, experience and successes of its predecessors. Therefore, they are the best team ever.”

As mentioned, the Dutch team aren’t the only ones who think they’re in with a chance of success, however. A US team from California’s Stanford University is also confident its half million dollar solar car will be the first across the finish line.

Its entry, Xenith, has already been road-tested on sunny Californian freeways, and has a cruising speed of up to 100 kmh, using a 1,300-watt solar array. If successful, it would be the first American winner since 1987, when the General Motors Sunraycer won.

The Stanford team is also keen to do better than its efforts during the last Solar Challenge. That year, only a third of all entrants finished, and while the Stanford entry managed to make the finish line, it came in last place.

The 2011 team reckon improvements including an extremely light and thin carbon fibre shell and super-efficient anti-reflective solar panels will help steer the car to victory.

Whoever is the eventual victor, the real winner will be green motoring, as the technological innovations made in the construction of the entrants will surely trickle down into the mainstream automotive industry. To see the latest prototype and production eco vehicles, check out the EcoVelocity Green Motor Show in London during September 2011.