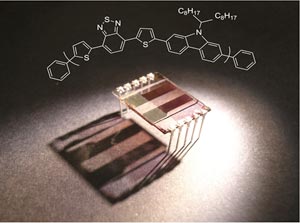 With the latest hike in energy prices in the UK, it’s clear that we need to continue moving towards cleaner renewable forms of energy. Innovation in this sector is continuing a apace throughout the world, and no more so in the solar sector.

Today, there’s a whole range of solar products for the home from rooftop installations to solar panel kits, and even to power small electronic devices. These days, hardly a day goes by without a new announcement of potentially cheaper, and more accessible solar products.

Researchers from the British Universities of Sheffield and Cambridge have made another breakthrough by producing solar cells, that can be deposited onto cling film. This could mean another ultra cheap way of producing renewable energy. This announcement comes hot on the heels of another breakthrough of solar cells being produced by inkjet printers.

Scientists have discovered that through using inexpensive and very simple methods, solar cells can be deposited onto cling film. Unlike conventional silicon solar cells, plastic (polymer) solar cells like these, can be manufactured much more cheaply, and on a larger scale.

Dr Andrew Parnell of the University of Sheffield said, “Our results give important insights into how ultra-cheap solar energy panels for domestic and industrial use can be manufactured on a large scale. Rather than using complex and expensive fabrication methods to create a specific semiconductor nanostructure, high volume printing could be used to produce nano-scale (60 nano-meters) films of solar cells that are over a thousand times thinner than the width of a human hair. These films could then be used to make cost-effective, light and easily transportable plastic solar cell devices such as solar panels.”

Professor Richard Jones of the University of Sheffield who has been working on the solar cling film project, outlined his views on the future of solar technology.

“Over the next fifty years society is going to need to supply the growing energy demands of the world’s population without using fossil fuels, and the only renewable energy source that can do this is the Sun”.

“In a couple of hours enough energy from sunlight falls on the Earth to satisfy the energy needs of the Earth for a whole year, but we need to be able to harness this on a much bigger scale than we can do now. Cheap and efficient polymer solar cells that can cover huge areas could help move us into a new age of renewable energy.”

It seems like the race is on to discover more ways of producing solar energy from flexible materials. Earlier this year American scientists announced a new cutting edge discovery of ‘nantennas’, which they claim could capture more than 90% of available light to produce solar power.

With all this innovation, cheaper solar power is starting to become a reality. The race is now on to manufacture these technologies and bring them into the marketplace. Whatever happens in the future, it’s safe to say that the future is bright for solar energy.