InterRail Europe is one of the most travel experiences in the world and certainly the best way to see this vibrant continent. If it’s your first time travelling the continent or you have limited experience – we recommend a grand tour of the capital cities.

These days InterRail Europe tickets have no restrictions on age, so anyone can embark on on this wonderful experience.

Europe’s capital cities are all unique and loaded with their own distinct blend of culture and history. Train travel is the best way to experience this diversity – as you can sit back and relax, enjoy the scenery and meet the locals.

Our InterRail Europe route samples all major parts of the continent North, West, East, Central and the Mediterranean. We take you into some of the cheapest capitals in Europe both in and out of the Eurozone. We start you off in Paris, always a favourite destination, before heading north east to Amsterdam. From there visit Copenhagen to sample Scandinavia culture in Denmark’s capital city.

The next two stops will be refreshingly much easier on the wallet. Berlin is having somewhat of a renaissance at the moment and is also one of the cheapest capital cities in the Eurozone. From there head to Prague, the beautiful capital city of the Czech Republic, which still has some of the lowest prices on the continent.

The next leg of our InterRail Europe classic grand tour takes in three capital cities on the River Danube. First stop is Vienna, before heading on a relative short journey to Budapest, one of the cheapest cities in Europe. The last city to visit is the cool and funky Belgrade, Serbia.

For the final leg of our InterRail Europe itinerary we head to the Mediterranean and the mountains. First off, head south to Athens the ancient capital of Greece. From there, via train and boat you can travel to Rome. The final stop is Bern in the Swiss Alps, where the air is clean and ready to refresh you at the end of your long journey.

To work out exactly where you want to go and spend time Green Abode recommends these books below available from Amazon. These will cover all of the cities in this classic grand tour of capital cities.

Sleeper or overnight trains are great for long distances and putting in some miles. This saves valuable sightseeing time and often makes sense on longer journeys. Most of the time you will have a choice between a standard seat, couchette (seat that folds out to become a bed) or a proper cabin. The standard seats are sometimes free and couchettes (seats that recline into beds) are the next best budget option.

For a more comfortable nights sleep you may want to upgrade to a sleeper cabin. Whatever you decided to do, it’s a fantastic feeling waking up a new country, having departed another one the night before. Each journey has different types of sleeping arrangements, so you will need to check each time.

London to Paris by train

You cannot use your InterRail pass in your home country, so you will need to arrange a separate ticket. To kick off your European adventure take the Eurostar from London St. Pancras to Paris. Trains run very frequently and you should be able to get a return ticket from £69.

Paris to Amsterdam by train

If you want to avoid paying supplements you can take a combination of intercity and regional express trains via stations in France and Belgium. This journey will take between 7 – 8 hours. You could always break up the journey and spend a few hours or more in Lille, France or Antwerp, Belgium. Alternatively, if you have the budget and want to travel at speeds of up to 186mph you can take a Thalys high speed train which takes just over 3 hours.

Amsterdam to Copenhagen by train

This journey is perfect for taking the overnight City Night Line service which leaves Amsterdam at 7.00pm and arrives in Copenhagen just after 10am the following morning. You will need to pay a supplement which will vary depending on the type of sleeping arrangement you take. You can also take a combination of day three day trains which take approximately 11 hours.

Copenhagen to Berlin by train

From Malmo, Sweden you can depart at 9.33pm and arrive in Berlin at 6.04am. Couchettes on this route are 19 Euros when using your pass. There are frequent trains running between Copenhagen and Malmo. There is one day train which you may want to consider as it is on an ICE high speed train and you do not have to pay any supplements. This rail journey departs Copenhagen at 7.45am and arrives in Berlin at 2.27pm. 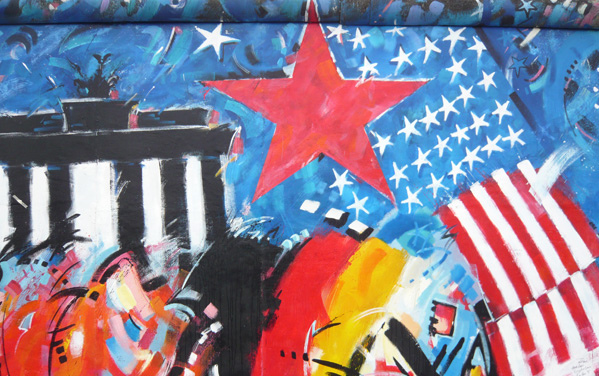 The East Side Gallery, Berlin - diverse art & graffiti on the old Berlin Wall. It's a must see if you are InterRailing on a budget as it's free!

Berlin to Prague by train

For this leg of the journey it makes sense to take a day train as the journey only takes 4.5. There does not seem any point taking the night train for this leg as the journey is too short. Also, Berlin and Prague are two of the cheapest cities in Europe for hostels and hotels.

Prague to Vienna by train

There are some sleeper train options on this route, however, the journey time is only around 6 hours. The all year round overnight train has sleepers but no seats or couchettes. From May-September an extra train runs where there is only seats but you do not have to pay a supplement. The day train option only takes 4.5 hours, you may have to pay a supplement if you take the high speed train.

Vienna to Budapest by train

This journey is just a short hop of just 3.5 hours on the Railjet train. This journey is free of any supplements for InterRail Europe pass holders. There is at least six trains which depart Vienna to Budapest.

Budapest to Belgrade by train

For this part of the route it’s recommended to take the night train which departs Budapest at 11.30pm and arrives in Belgrade at 6.49am. There are some free seats on this train, and you do not have to pay a supplement. There are two direct daily trains departing Budapest at 10.05am and 1.00pm, both take just over 7.5 hours to do this trip.

Belgrade to Athens by train

For both night and day trains you will need to go via Thessaloniki, Greece to get to Athens. This is a long journey, however, it’s a very cheap option to get a good sleeper compartment. The night train departs Belgrade at 9.50pm and arrives in Thessaloniki at 12.54pm the next day. Trains from Thessaloniki to Athens take from 4 – 7 hours depending on whether it’s a standard or intercity express train.

Athens to Rome by train and boat

Again this is another long journey which involves getting a train, boat and train. From Athens take a train to the port of Patras. From Patras you can take overnight boats to either Bari or Brindisi. You do not need to pay a supplement if you are prepared to sleep on deck! From Brindisi there is an overnight train to Rome which takes just over 7.5 hours. For Bari the journey is about 6 hours.

Rome to Bern by train

It’s best to book a single from Bern back to Paris, which start from £70. From there, you can pick up the Eurostar return journey which you bought at the start of the trip.

Which ticket do I need?

For this InterRail Europe tour of the continents capitals we recommend you take the one month Global InterRail Pass. One month gives you enough time to see Europe’s capital cities without it being a rush. This could also allow for the odd day trip here and there.

Alternatives would be to cut out so many cities and take a 22 days flexible or continuous pass. If you need some more help planning your trip, check out Green Abode’s InterRail advice guide.

If you’ve a couple of weeks’ holiday to spare and fancy an eco-friendly adventure, then an InterRail trip to Northern...