InterRail Balkans and Back Adventure


If you’ve been InterRailing before and have covered all the classic European destinations, or simply have a sense of adventure and fancy an epic journey, then why not head out east to the Balkans, one of the continent’s most interesting and diverse regions.

From the Slovenian mountains to the Croatian coastline, the cities of Bosnia to buzzing Belgrade, it’s a region like no other. Our trip takes you straight across Europe to Eastern Europe, with plenty of time to get to know the Balkans, with a sojourn into Bulgaria and Greece before returning with some time out in Italy, Switzerland and France.

To kick off your Balkan InterRail adventure, catch the Eurostar to Paris (this isn’t included in the InterRail pass), but return trips cost just £72 return, then walk across from Gare du Nord to connect with the ‘Cassiopeia’ sleeper train to Munich from Gare de l’Est. The train leaves Paris at 8.20pm and arrives in the capital of Bavaria in time for breakfast.

It would be a shame not to spend at least a day in Munich. Famous for the Oktoberfest, its beer halls are lively year round, and it’s museums and galleries are world class. Then there’s the pretty English Gardens, superb shopping, and a fantastic dining and café scene. Spend the night in the city then make your way onwards to Eastern Europe, catching the train to Slovenia the next morning.

It’s only about 5 ½ hours onwards from Munich to Slovenia, to arrive at the incomparable beauty of Lake Bled. Slovenia is where middle Europe meets the east, and it’s a land of pretty churches, soaring mountains and deep lakes. Although you could easily make your way straight to the capital Ljubljana, you’ll not want to miss a night in Bled to soak up the scenery.

Regular trains make the 40-minute journey to Ljubljana, one of Europe’s most compact and attractive capital cities. Its historic streets are all walkable, and it’s a joy to simply sit by a riverside café and watch the nightly promenade. You’ll definitely feel like you’re in East Europe now, but while Slovenians speak a Slavic language you’re not in the Balkans proper yet. The next day it’s time to move on to neighbouring Croatia.

It’s around 3 hours by train to Croatia’s capital Zagreb. It’s a city of grand, mansion-lined boulevards set around a compact medieval core. Okay, there are a few communist era tower blocks too, but they are mostly out of the centre. The city has a lively, youthful feel, but you’ll probably only need a night here to get a feel for the place. There’s plenty more to come!

Now you’ll be moving right into the heart of the Balkans. It’s a journey of around 10 hours from Zagreb to Sarajevo, and you can take the overnight train, although there are no sleeper carriages at present. Alternatively, enjoy the countryside on the scenic daytime journey. Once there you’ll be in one of Europe’s most cosmopolitan and exciting cities, now firmly stepping out of the shadow of its recent troubled past.

It’s about 3 hours by train south from Sarajevo to Mostar, on one of Europe’s most scenic rail lines, passing through stunning mountain scenery. Mostar is rightly famous for its bridge, destroyed in the war and now proudly restored. Watch the divers jumping from it into the River Neretva and browse the market-lined cobbled streets of the Old Town. 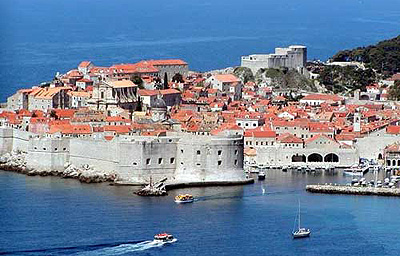 Dubrovnik is a beautiful city and requires a small detour from your InterRail journey as there is no train station. It's a must see on a Balkans trip

As you’ll be in the area, it would be a crime not to visit Dubrovnik, the ‘Pearl of the Adriatic’. Trains don’t run there so you’ll need to book a bus day trip, or perhaps spend a night in this wonderful walled coastal city, before returning to Mostar to continue the journey.

You’ll need to make your way back to Sarajevo to catch a connecting train to Belgrade, a journey of around 9 hours. The Serbian capital may not be the most beautiful in Europe, but it’s certainly one of the most lively, and if you’re a night owl you’ll find no shortage of kicking nightlife. The signs will all be in Cyrillic by this point, so remember to pack your phrase book!

The next leg takes you across the border to Bulgaria. It’s another long journey (about 10 hours to the capital Sofia) so you may want to break it in the historic Serbian city of Nis. Sofia itself is a mish-mash of old and new, with sparkling Orthodox churches next to communist-era architecture. It’s well worth a couple of nights.

You’ll need to swap to a bus to reach Greece, as its international train connections are currently suspended due to the financial crisis. The 300km journey to Thessaloniki is very scenic, though, and Greece’s second city is a lesser-known coastal gem. It’s also only a relatively short hop across to Athens from here.

The Greek capital is a sprawling, chaotic place, but since its facelift for the 2004 Olympics it’s more traveller friendly. Certainly, its remarkable ancient sites and bustling central Plaka district are not to be missed. It’s also the gateway to the Greek islands, and we’ve factored in 5 nights for some time lazing by the beach and enjoying the island life.

Return to Athens to take the 7-hour train ride cross-country to Igoumenitsa on Greece’s western coast. From here catch the long ferry up to Venice (this international ferry journey is included with your InterRail pass) for a couple of nights in the remarkable city of canals.

You’ll appreciate the short trip today after all those long journeys and ferries, so it’s only an hour and a half from Venice to Verona, the city that inspired Shakespeare’s Romeo and Juliet. It’s a lovely historic city with a huge Roman amphitheatre and a great overnight stop where you can get to know Italy better.

It’s only about 5 hours from Verona to Zurich, changing in Milan, and you’ll be treated to some splendid Alpine scenery on the way. Zurich is an elegant lakeside city with excellent restaurants and plenty to see. Rail connections are also superb.

While you’ll have passed through Paris on your way out, here’s your chance for an overnight stop here before you return to Blighty. It’s a journey of approximately 4 ½ hours from Zurich, passing through the pretty Champagne region of France. Toast your trip out to the Balkans and back with a glass of French wine and start planning your next InterRail adventure.

Which InterRail pass do I need?

For this epic journey to the Balkans and back, you’ll need a full, one-month Global InterRail pass which offer unlimited travel. If you want a cabin or fold down seat on some sleeper services you may have to pay a supplement, and reservations are needed on more popular routes, but apart from that, it’s all covered.

If you can’t take the whole month out but fancy giving InterRailing a go, get the full low-down on the other flexible InterRail ticket options with The Train Hacker’s InterRail passes guide.

If this Balkan adventure has whetted your appetite, why not check out Green Abode’s other InterRail itineraries – the Grand Tour of Europe’s capital cities, InterRail Eastern Europe, and the InterRail Great Northern Route.

2 responses to “InterRail Balkans and Back Adventure”

InterRailing – the three ages. Which one are you?

Times were when InterRailing was just for students on their summer holidays or keen to have one last blow out...