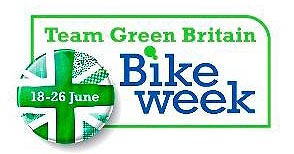 If you’ve got a bike but it’s rusting away in the shed, or if you’d like to use pedal power for you daily commute or to pop to the shops but are worried about road safety, then look out for events organised as part of Team Green Britain Bike Week.

The Bike Week starts on Saturday 16 June 2012, and is an annual celebration, and promotion, of all that’s good and green about cycling. It’s billed as the UK’s biggest mass participation biking event, with more than 500,000 people taking part in events in 2011.

The events aim to get more people into cycling and show how cycling can easily be part of everyday life, and highlighting the social, health and environmental benefits of switching to two wheels.

Fixing up thousands of old bicycles

A major part of the 2011 Bike Week will be ‘Britain’s Biggest Bike Fix’, aiming to get as many bikes as possible fixed up during the week. It’s estimated that about 77% of Brits own a bike, but only 14% ride them regularly.

A lot of this is down to bikes not being repaired properly, so ‘Dr Bike’ events are being planned around the country to encourage people to dust off their old bikes and get them tuned up and ready to ride again. Many unused bikes are sitting unloved because of simple issues like a puncture or skipping gears, which the network of Dr Bikes should be able to fix in a jiffy. It’s hoped that thousands of bikes will be brought back to life during Team Green Britain Bike Week.

Bike events across the country

In 2012, they are pushing for more people to get back on their bikes, with a varied programme of National Trust cycling events. As well as their ‘Festival of Cycling’ from 16 to 24 July 2011, they’re organising a series of ‘sportive’ challenge rides and developing a network of new cycling hubs in the south west of England.

And if you fancy a bicycle made for two, check out Green Abode’s guide to the top ten tandem bikes out there.