Top 10 flea markets in France – travel there by train 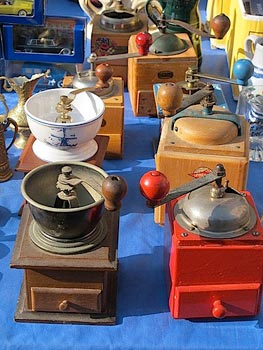 The flea markets of France are light years away from our often damp and dreary Sunday morning car boot sales. There are no boxes of Bucks Fizz LPs, broken Soda Streams or ropey Polaroid cameras in sight across the Channel.

You don’t need to fly to reach these wonderful markets, high speed rail means you can easily nip over to some of France’s best flea markets on a day trip. With Paris and Lille just a couple of hours away, there’s enough time to head over first thing, grab a few bargains, enjoy a long lunch and be home before it even gets dark.

Picking up second hand goods and making good use of them is an eco-friendly way to get the things you would like. So go green and indulge your shopping desires without worrying about the environment or the hassle of the airport. 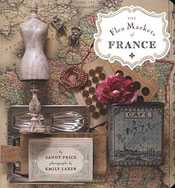 For a fantastic, in-depth guide to all of the other flea markets France has to offer, pick up a copy of Sandy Price’s ‘Flea Markets of France’ book. In the meantime, pick a destination, book your tickets, and enjoy la chine. That’s the French for looking for a bargain. Here are some of the best flea markets to visit by rail.

The Braderie de Lille is the undisputed king of French flea markets. It only happens once a year, but it’s Europe’s largest, with thousands of stalls. Over a million visitors head to this pretty city on the border of Belgium in search of a bargain every September.

The bumper brocante starts on Saturday morning and runs up until midnight on Sunday, giving you plenty of opportunity to immerse yourself in the carnival atmosphere and some serious bargain hunting. Keep your strength up with some of the local specialities like mussels and fries, and piquant merguez sausages.

Lille is just 1hr 20m away from London, making the journey to Braderie de Lille an easy day trip. Fares start at £65 return with Rail Europe >>

Porte de Vanves, every Saturday and Sunday, Paris – Buying and selling on the city’s southern edge

This 300-stall market is widely regarded as the best in Paris. Get there nice and early for first dibs on all the best stuff, since many of the traders start packing up at around 1pm. It’s a big, busy market, meaning the stock on sale regularly changes and the stallholders are up for a spot of bargaining. Expect to find anything from retro kitchenware to Art Deco goodies, and vintage clothing to jewellery. Porte de Vanves is on metro line 13.

Toulouse is a wonderful, underrated place to explore too, with pastel pink medieval buildings in the old town and La Cité de L’espace, a huge theme park dedicated to space exploration, on the outskirts of town.

As you’d expect from one of France’s most picturesque cities, the monthly flea market in Annecy’s Viarme Quartier can claim bragging rights for the best location of the country’s brocantes. A lot of the goods on offer reflect the city’s status as a gateway to the Alps. Vintage snow shoes and skis, rustic Savoyard cheese-making equipment and boxes full of cowbells all regularly turn up, alongside more traditional wares like antique paintings, pottery and furniture.

Porte de Clignancourt, every Saturday, Sunday and Monday, Paris – Twelve markets for the price of one

The Porte de Clignancourt area of Paris hosts no fewer than twelve different flea markets, clocking in at around a couple of thousand stalls in total. That means there’s something for pretty much everyone.

Head to Marché Vernaison on Rue des Rosiers for narrow alleyways full of collectables like kitchenware, books and table lamps, or if you’re feeling flush, Marché Dauphin on the same street for some up market jewellery and ornate antique furniture. Porte de Clignancourt is on metro line 4.

Cours Saleya, every Monday, Nice – Rooting for bargains on the French Riviera

As you might expect from one of France’s most glamorous cities, this flea market just behind the wonderfully chic Place des Anglais is a little heavy on the high end goods, but it’s still perfectly possible to pick up a bargain. Nice’s cosmopolitan past means it’s also a great place to find collectables and curios from outside of France, whether it be from Italy, which Nice was once a part of, or further afield.

Glassware, silver, linens, paintings, vintage posters and the odd bit of furniture are all out in force, and it’s a wonderful diversion from all that sunbathing and snoozing on the Cote d’Azur’s beaches.

7. The Villeurbanne flea market in Lyon

Lyon’s well known for its foodie credentials. Legend has it that France’s gastro capital has more restaurants per yard mile (yard or mile?) than anywhere else in Europe. The Sunday morning flea market is pretty fabulous too, with around 400 stalls regularly packing the streets to sell rustic goodies like old boules sets, vintage kitchenware, farm tools and antique furniture.

Villeurbanne, also the site of the impressive Gratte-Ciel Art Deco towers, is a few miles to the north east of the city centre. Take the Rhone Express T3 tram from the city centre.

Boulevard Béranger, first Sunday of the month, Tours – Bargain hunting in the “Garden of France”

Once a month the ”Garden of France” hosts a brilliant flea market of around 150 stalls, all stuffed with fine French porcelain, books, furniture and charming old agricultural equipment. The city’s a doddle to reach by rail – just over an hour from Paris on a high speed TGV, so it’s perfectly possible to visit the Boulevard Béranger market on a day trip. However, it’s well worth spending a few days in delightful Tours to explore the wonderful architecture, vineyards and botanical gardens.

Place Viarme, every Saturday, Nantes – Antiques on the Atlantic coast

This 100-stall strong market on the Brittany coast is a brilliant place to unearth all kinds of antiques, curios and collectibles. Nantes’ stunning location on the rugged Atlantic shores means it’s easy to unearth some vintage or quirky nauticalia, alongside more usual flea market finds like books and postcards, pottery and porcelain, and Quimper ceramics.

Place Viarme is easily reached by taking Tram 1 to Commerce then changing to Tram 3 for the Viarme-Talensac stop. You can catch the tram from right outside the train station.

L’Espace Mosson, every Sunday, Montpellier – Fancy a market a stone’s throw from the Med?

It may be about as far south as you can go in France, but buzzing, beautiful Montpellier is just three hours away from Paris by high speed TGV.

Don’t let first impressions of this huge, sprawling market put you off. Head past the first stalls you see and you’ll find antique and vintage furniture, classic blue and white enamelware, paintings and pottery, as well as dozens of food stalls serving up pungent snacks like merguez and andouillette sausages.

Prices quoted are subject to availability at time of booking. Content provided in partnership with Rail Europe.