It might be the mid of summer, but if you’re a keen skier, or are even thinking about hitting the slopes for the first time this winter, it’s time to start planning your winter break.

And those who’d like to travel the eco-friendly way, and get right into the heart of the Alps as well, can now take advantage of Eurostar’s direct seasonal ski services.

The high-speed passenger service linking the UK with Europe is running its ski trains from 17 December 2011 and 14 April 2012. Tickets have just gone on sale, with return fares straight to the French Alps starting from £142.

Day and night services will carry skiers straight to the French ski towns of Moûtiers, Aime-La-Plagne and Bourg St Maurice. These in turn are only a short bus journey to many of France’s other most popular ski areas, including Courchevel, Tignes, Les Arcs, La Plagne and Meribel.

Cutting down on transfers & easier on luggage 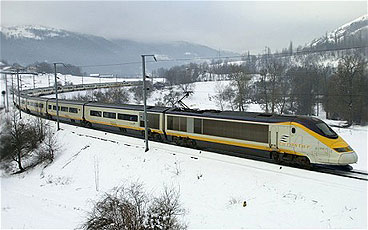 Eurostar ski trains are more convienient than the hassle of airports

It means that travellers can avoid long transfer journeys from regional airports and also have less luggage hassles. Eurostar lets ski passengers take an extra item of luggage on top of the normal luggage allowance, so those taking their own skis or snowboard can do so at no extra cost.

“French ski resorts are some of the most popular in Europe, and more and more travellers are seeing that high speed rail is the perfect way to reach them, with a minimum of stress and limited impact on the environment,” said Mary Walsh, Eurostar’s Director of Communications.

“On average, a Eurostar journey accounts for just one tenth of the carbon emissions of an equivalent flight and allows travellers to arrive close to their resort, relaxed, refreshed and ready to hit the slopes.”

Extra days on the slopes

The Eurostar night services arrive in the Alps early Saturday morning and depart late on a Saturday evening, giving keen skiers a couple of extra days on the slopes compared with standard flight packages. The Saturday day service, meanwhile, offering stunning winter views before arriving in the Alps.

Ski trains have been running for many years, but since the opening of the Channel Tunnel and high-speed Eurostar service, are now a viable, green alternative to flying out to the Alps. In fact, you don’t have to wait until winter to enjoy Europe by train, as fares to Paris start from £39 each way and it’s easy to reach other European destinations from London. With InterRail tickets you can see even more of the continent cheaply by train.