How to Go Green to UK Music Festivals this Summer

As the UK music festival season gears up for another summer of revelry, it’s encouraging to see how many are making significant efforts to reduce their environmental impact. And it’s not just the usual suspects like Glastonbury that are championing the eco cause, with a new award scheme encouraging festivals across the country to go green.

You can make a difference too, travelling to UK festivals by green transport – not only good for the environment but also often the most convenient and cost effective way, too.

While many of the big festivals are doing their bit, you can help too by travelling green to UK festivals this year. You’ll save money as well, and won’t risk getting your motor stuck in the mud.

If you’re going to one of the smaller festivals and National Express aren’t organising special event transport, then it’s likely they’ve got a route to a nearby town. Alternatively, have a look at the amazing deals that Megabus offer, with one-way tickets costing from just £1. And if you book in advance, you can get some good deals on train fares – perfect for a trip north to T in the Park in Scotland.

Other ways you can be a green festival goer

As well as using public transport, be a green festival-goer by taking all your belongings with you when you leave the site. Use the recycling points during the event and bring your own reusable water bottles to fill up at drinking water points instead of buying bottled water.

Festivals like Glastonbury have been championing the eco cause for many years, and now UK music industry environmental group Julie’s Bicycle has developed its Industry Green (IG) accreditation for music festivals.

This year, 14 festivals have been awarded IG certificates, ranging from one to three stars, and include some of the biggest events on the festival calendar like Leeds, Reading, the Isle of Wight festival and the Big Chill.

To qualify for an IG award festivals need to concentrate on recycling provision, pubic transport arrangements, renewable and low carbon energy use, reduced water and landfill waste, and the sourcing of local merchandise and food. 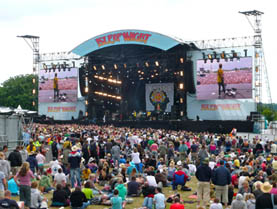 It has already made carbon reductions of 22% through improvements to audience travel emissions. The festival is also installing solar powered mobile phone charging stations and supports local conservation projects, including the Let it Bee campaign, which successfully restored bee populations to the Isle of Wight.

Glastonbury aims to reduce festival emissions by 10% in 2011. The world-famous event has a team of five looking after sustainability issues, and has long been a supporter of environmental causes.

In 2010 the festival’s Worthy Farm site installed 1,500 square metres of solar panels, and now uses green tractors running on biodiesel and electric, solar-charged buggies for festival transport. Stallholders using solar power kits for their stalls can also recharge them using the farm’s solar panels and get a reduced pitch fee at next year’s festival.

Festival goers arriving by public transport will also get sole access to solar showers, discount on meals, free yogurt and festival t-shirts. Cyclists even have their own reserved camping field.

Hard rocking festival Sonisphere has also gained IG accreditation, and aims to reduce carbon emissions by 10% over the next three years. Sonisphere encourages contractors to be environmentally conscious and ensures that green waste management and travel policies are in place during the entire build period as well as the event itself. Also, bound to be popular with the punters, there’ll be a 10p cup redemption scheme for all cider and beer at this year’s festival.

Scotland’s finest T in the Park was one of the first festivals to make a carbon audit with Julie’s Bicycle. It’s also Europe’s first to go carbon neutral, and has developed a range of green initiatives.

During the set-up period, festival staff are given bicycles to get around the site, and after the event abandoned tents are donated to the International Relief Trust. Crew catering waste is taken to a compositing and anaerobic digester facility, and, like Sonisphere, T in the Park drinkers earn a 10p refund for returned cups. In 2011, the festival aims to reduce waste to landfill by 50% and reduce diesel use by 10%.

Stuck for a festival ticket? Try a ticket exchange

If you’re raring to go but stuck for a ticket to your must-see festival, or have an extra ticket you don’t need any more, then ticket exchanges are a tout-free way of matching sellers with buyers.

Festivals not your thing..how about a green ‘daycation’ >>