With so much solar power capability in parts of the developing world, it’s hoped that this natural source of power is the answer to many of their energy needs. A team of MBA students from Imperial College Business School has just won £10,000 for a business plan that could enable retailers in the developing world to generate an income by offering a solar mobile phone charging facility to local people.

The students won a best business plan competition to further develop the solar powered charger named Solaris, and move it from prototype to manufacture. The team behind the business plan beat another eight finalists. 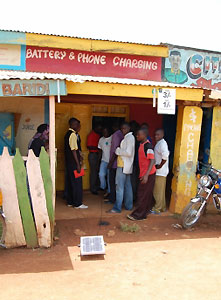 The team had been working on their business plan with the creator of the Solaris solar phone charger, Siten Mandalia. His prototype can charge multiple mobile phones at the same time, and can function continuously on a sunny day. Having travelled through South Asia, East and Central Africa, Siten believes that it could open up opportunities for businesses in these regions.

To bring the product to market, the team of MBA students undertook a rigorous process to formulate a viable business plan. This included further designs of the solar phone charging device.

MBA student Krzysztof Zylak, who led the team in the competition, added: “The prototype went through many changes and was tested rigorously at every stage. As a result, we now have a highly efficient and robust device. The final design is now being prepared and we are working towards manufacture with our partners in China.

“Success in the competition would not have been possible without the team. Everybody brought something different to the table, making this a very unique experience. In any new business there are always teething problems to overcome, but I think Solaris has a very bright future.”

Having travelled through India and other developing countries the team at Green Abode can see a great deal of potential in this product. Mobile phones are the main form of communication in the developing world and shops are often busy with customers topping up credit.

A solar powered charger would be a welcome addition to these hubs and allow people to charge their phone without the use of precious mains electricity.